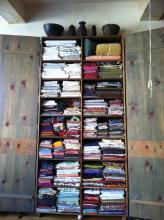 The Greenhorns Library is currently boxed up and waiting for the right space and time to become a resource for the community of farmers and researching seeking to fix our nation's food systems. Right now you can find our (under construction) catalogue at our LibraryThing page.

We hope, once our library is catalogued and has a permanent home, for it to become a site of research, drawing scholars to utilize our collections of historical books, biological and botanical research, social science studies, and repositories of USDA and NGO publications. It will take big dreams such as these, and plenty of hard work, to address the challenges we face in the environmental and agricultural spheres.

A project of the Greenhorns

My Library at LibraryThing

When I was hired on at the Greenhorns I quickly became captivated by one of the projects I was assigned. Living quietly within a 10' by 10' storage unit are about 125 boxes of books, covering everything from environmental economics to agronomy and farm history. My job is to catalog this collection and organize it in such a way that it can serve as part of the network of agricultural and environmental libraries whose mission is to collect and distribute resources to the young farmers' movement.

It was, and remains a daunting task. Turning a storage unit full of books into a library requires decision about cataloguing and collections curation, strong attention to detail, and the ability to work for hours in the musty confines of the books' current home. The stories, data, and history that lies in those boxes and between those dusty covers, however, hold the potential to shape and mold the young farmers' movement, and it is for this reason that the Greenhorns wants to make that information available. We hope for our own library to serve as a model and a comrade to other agricultural and radical libraries, lending moral and material support to the pedagogies and curricula of emerging young farm educators. Such lofty ambitions requires careful and mindful consideration of each decision that arises along our path; it is for this reason that I offer my own reasoning on some key early decisions. The outcomes may not serve the need of every young library that trudges along the path of activism, but resilience grows through community support, and information is strong fertilizer.

The first question I found myself asking was how best to arrange and frame our catalog. There were several options that would complement our goals; building a cataloguing system from scratch, piggybacking on the catalog of a sister institution, or choosing from an array of different online applications. After some consideration and consultation, LibraryThing emerged as the best home for the Greenhorns collection online for the time being. Several factors contributed to this decision:

1- Ease. This can cut both ways--the ease of use of both entering and accessing data is critically useful at this stage of our own funding and support . Rather than me or someone else spending Greenhorns time and money building a catalog system from scratch, I can poll Amazon.com and Library of Congress data through LibraryThing's database to easily populate our catalog with a lot of information, and the subscription to use this service costs a flat $25 (If your collection is less than 200 books, the service is free). With a multi-thousand volume library, making it simple to import book records into our catalog is valuable in time and money, two major complicating factors of getting small libraries off the ground. One thing to consider, however, is that our library is tied to LibraryThing, their business model, and their future, but I address that concern in the next section.

2- Interoperability/Portability. One feature that was key choosing LibraryThing was the ability to export copies of the catalog in several formats-- .CSV, .TSV, or MARC records. This will allow the Greenhorns to keep its catalog on file as well as easily produce hard-copy archival versions. This can also help to automate / speed up future functions such as creating shelf lists and printing labels. If and when LibraryThing gets bought out by a larger entity such as Google (like recently happened to the similar GoodReads application) or goes defunct, we can easily separate our collection and catalog from it and migrate to another system, whether that be digital or manual.

3- API support- LibraryThing has its own set of API tools which allow for integration into other Greenhorns and allied websites. There's easy widget and extension support (one example is above, and on our Farmhack shop page and ways to utilize Facebook, Twitter, as well as LibraryThing's own social networks to create conversations and facilitate the exchange of farm information through the Greenhorns' LibraryThing catalog.

4- Fairly simple tagging features- This is useful for being able to add our own cataloging data to the system. I am still working to find the the best ways of using the tagging tools for the Greenhorns collection, and each library that uses LibraryThing has to figure that out for itself, but it is incredibly helpful that there is a degree of customization support natively built into the application.

5- A Strong and passionate userbase- The healthy community around the software gives me hope for its resiliency, and the ability to find technical support in the future. I have already called on the community for help in resolving a technical issue, and was impressed with the speed and level of service, both from site personnel and volunteers. Being able to crowd-source problems reduces individual barriers of technical-skill.

These five features made LibraryThing a good fit for our organization, and cataloguing is currently underway. Starting that stage of building our library, though, brought up its own set of questions. Among figuring out best practices for tagging and sorting the books came the question whether to use pre-existing cataloguing systems such as the Library of Congress or Dewey Decimal codes, or create our own.

At the start of this project, the Greenhorns director put me in touch with a few people, and counseled me to follow the lead of the Schumacher Center's library. With that in mind I talked people involved at the Schumacher Center. Working from those conversations, and from learning how the Schumacher's catalog is organized--Library of Congress where applicable, with a native intuitive system for works not in Library format-- I came to the conclusion that primarily using the Library of Congress cataloging system would be the most effective way to present and utilize our own information. In making this decision, I relied on two factors:

1- Interoperability. LOC cataloging is what the majority of US academic and research libraries use. This makes finding book data simpler, but also increases the usefulness of our library as part of a greater network, both of allied institutions but also as part of the broad canvas of libraries in the US and abroad.

2- Ease. When doing a test input of books from our collection into LibraryThing I used ISBN, Library of Congress, and Dewey Decimal codes as benchmark ways of organizing the collection. LibraryThing's database could use an ISBN code to pull up Library of Congress cataloguing information very quickly most of the time. If not, I could usually find the record from the control number in the book or by a search of the Library of Congress's catalog. These side searches were simple and did not add much time to the average amount of time spent cataloguing each book. Dewey Decimal numbers, on the other hand, occassionally came through in ISBN searches. When they did not, though, I had to find them, either in the Library of Congress's catalog (occassionally they were listed there), or by finding the book in WorldCat (A network of catalogues run by the organization which owns the Dewey system's catalog) and finding a linked library that used Dewey Decimal, to snag their code. This was very time-consuming, especially as most libraries that WorldCat linked to only used Library of Congress cataloging data.

While a top-down system such as the Library of Congress catalog (and also the Dewey Decimal System) is not a true open source resource, using already-established cataloging systems by which to list our books can help us in networking with other collections and facilitating research, growth of knowledge, and creative dispersal of the information we curate. How we present our library, and the ways in which shelves are organized, is a next thing for the Greenhorns library team to think about, but we hope this information can serve other organizations that seek to establish community and organizational libraries to grow their own movements.

In short, establishing a non-profit library that seeks to hack into and serve the activist communities in the young farmers and environmental sustainability movements requires mindfulness, clear direction, and no small degree of courage. It is a hard world out there, but confraternity, information-sharing, and knowledge of our past can help to build our communities and to grow pedagogies of resilience and justice within the food system and society.